The Office of the Bishop celebrated the Rev. Canon Dr. Marda Steedman Sanborn’s tenure as Canon to the Ordinary in the Diocese of Olympia this week, and Bishop Rickel appointed her Honorary Canon to Saint Mark’s Episcopal Cathedral in Seattle. We’re presenting Bishop Rickel’s letter accompanying this appointment in full below: 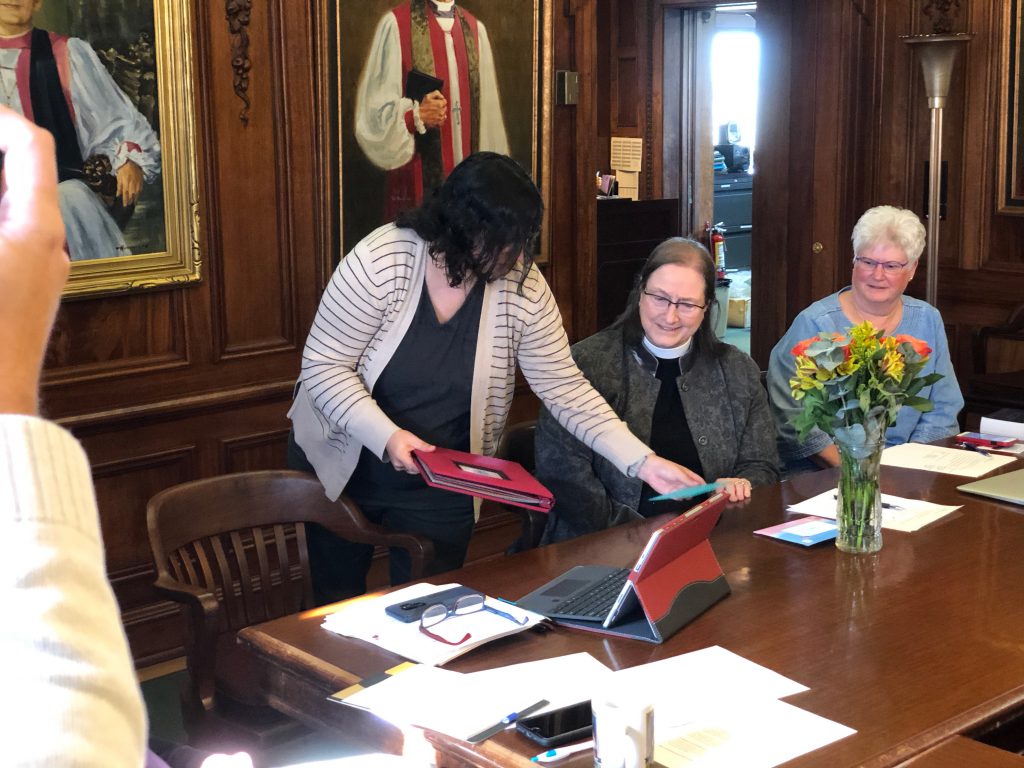 I write to you today with the appointment of the Rev. Canon Marda Steedman Sanborn as an Honorary Canon of Saint Mark’s Cathedral. Marda has served me, and this diocese, and church incredibly over these past years. We absolutely would not be where we are right now without her. I, personally, would not have been able to fulfill my role without her steady hand through her tenure.

Priest, teacher, counselor, and friend, Marda Steedman Sanborn was born on September 16, 1951 in Chelsea, MA, the third child of Allen and Marguerite Steedman. Though born on the east coast, Marda grew up in the Seattle area where her father worked for Boeing. Intelligent with a love of learning and compassionate with a desire to help those around her, Marda obtained her BA in history from the University of Washington in 1972 followed by a masters of education with an emphasis on deaf education in 1974. 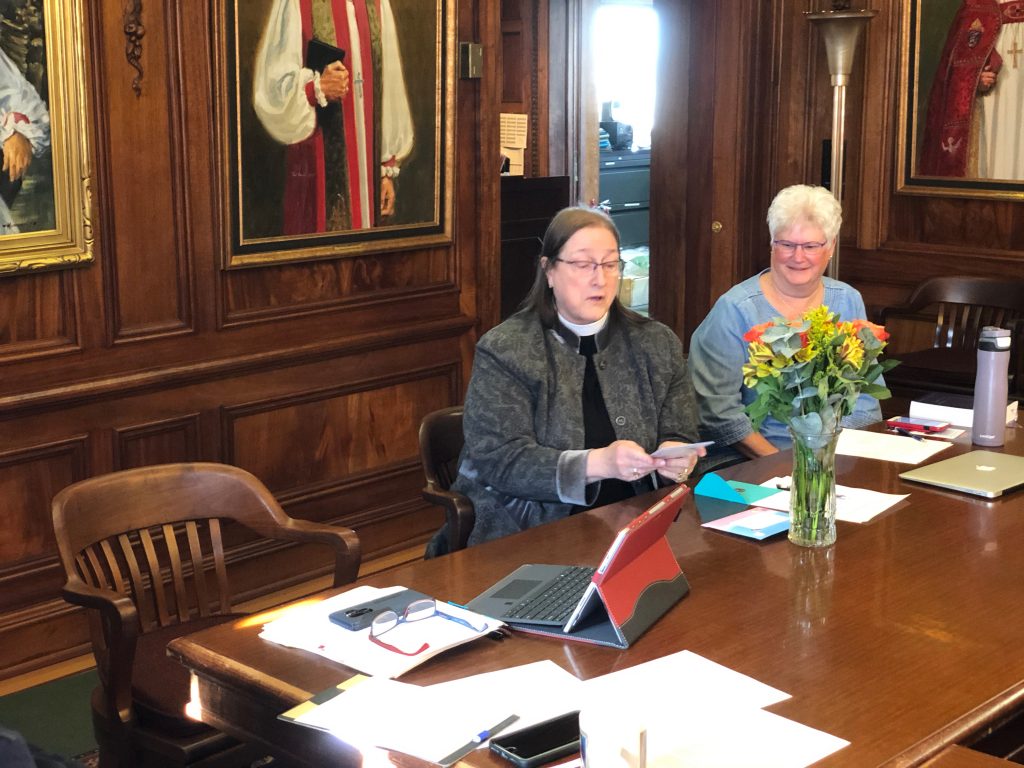 After graduation, Marda spent two years in Arizona where she was confirmed in the Episcopal Church before returning to the Northwest with plans for attending seminary. However, a variety of circumstances intervened putting these plans on hold, leading her to take a job in 1977 as a teacher of the hearing impaired for the Kent School District. Marda remained in this position for many years.

During this time – which Marda referred to as a time of Faithful Waiting, she attended St. John the Baptist in West Seattle and subsequently, St. Andrew in Tacoma, offering her skills in a variety of ways – both in the church and in the community. She counseled families with disabled and ill children, worked with abused children, served as an interpreter and counselor for the deaf, and assisted in establishing church programs for the hearing impaired. She served as a lay reader and lay eucharistic minister, as a licensed preacher, as a youth counselor, as a nursing home volunteer, as a tutor, as a hospital visitor, as an adult Sunday school teacher, and as a spiritual director.  She also served on the vestry, as the worship chair, and in a variety of other positions in her congregation. 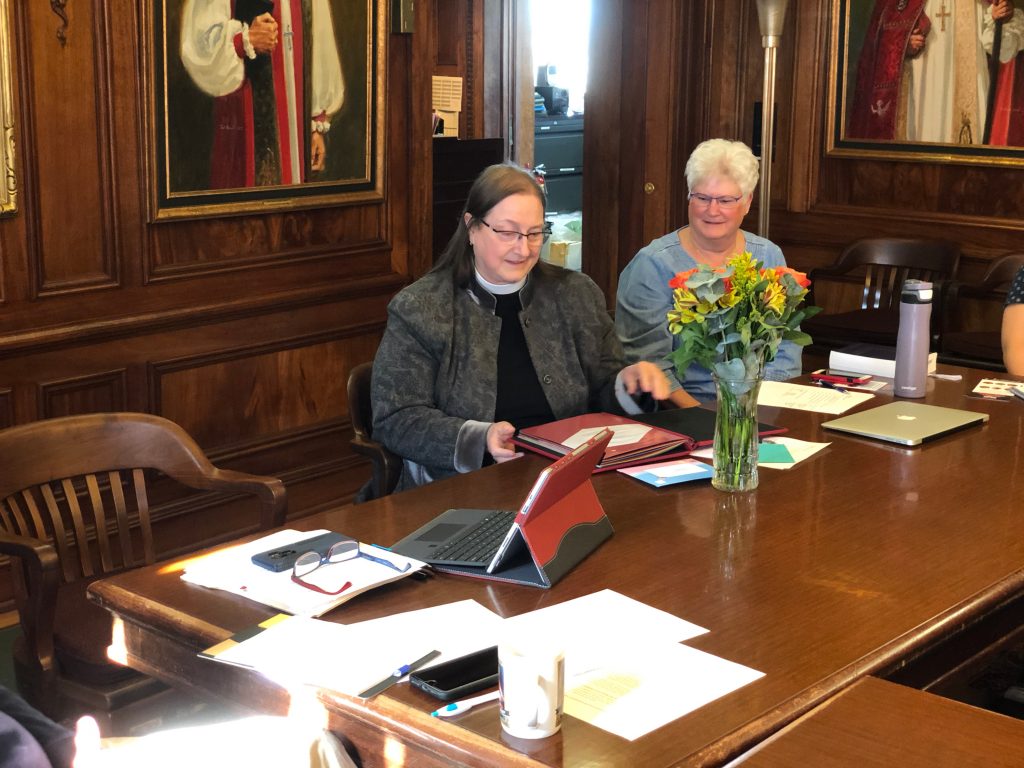 Marda’s lay ministry was one of true service and servant leadership. She wrote: I have attempted to establish my life as one dedicated to doing Christ’s work in this world, seeing myself as His hands and His feet. I feel God has blessed me with a variety of skills and talents and I see it as my responsibility to use them for His service.

Education has always been an important focus for Marda and while teaching and volunteering she also attended the Diocesan School of Theology, took post graduate courses and, in 1988, began work on her doctorate at Seattle University. 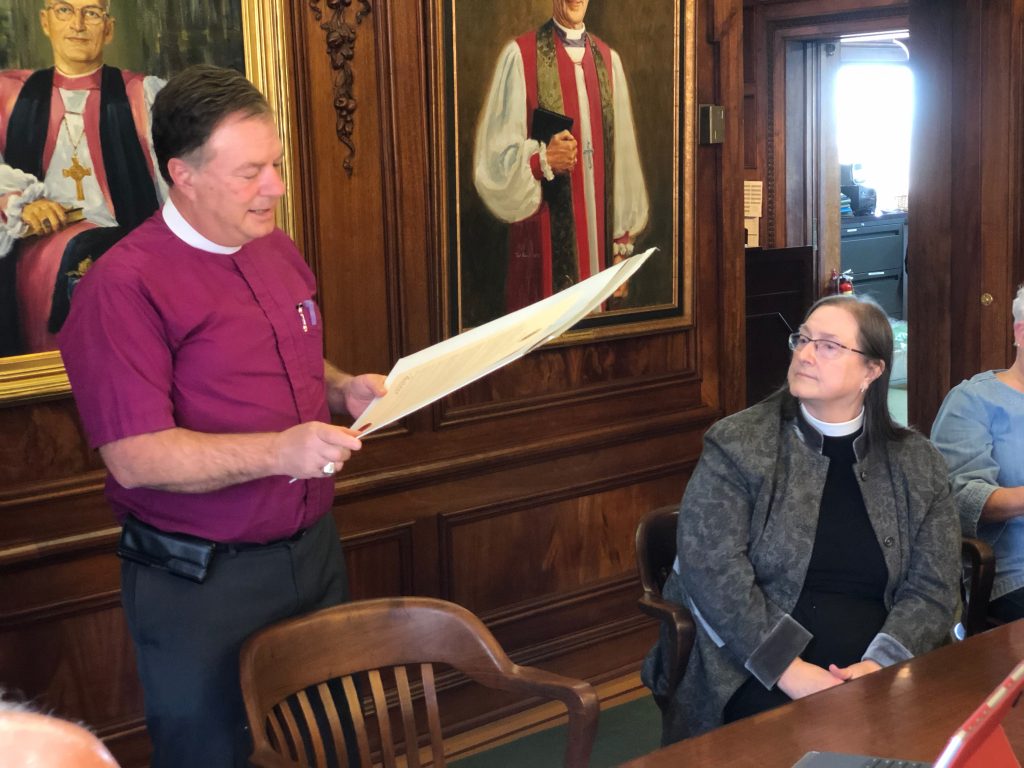 Also, in 1988, Marda began the process which would lead to her ordination to the diaconate – and she and her fiancé, Doug Sanborn, were married. So now, after a 10-year period of faithful waiting, Marda was a newlywed in a doctoral program working toward ordination, all at the same time!

She received her doctorate in May 1991, her daughter, Melissa, was born in July 1991, and on January 27, 1992, she was ordained to the diaconate. She continued her service at St. Andrew, Tacoma – only now in her official capacity as deacon with attention to youth and young adults, pastoral care, and liturgy. 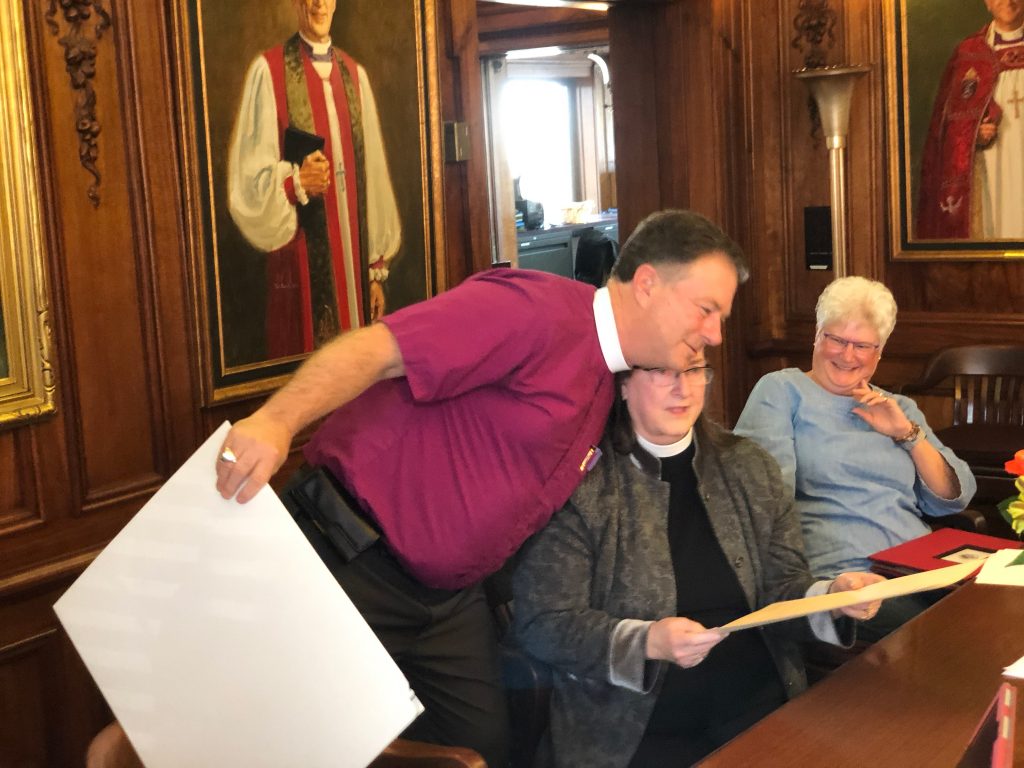 Later in 1992, Marda began her diaconal work at St. Mark’s Cathedral where she served as deacon and subsequently as priest – concentrating on pastoral care and spiritual development. Marda wrote:

It was a time of incredible growth as I learned to minister among a diverse population of God’s people. It was also challenging to juggle full-time teaching with part-time ministry and full-time parenting. We had not been at the cathedral but for a few weeks when a member of the congregation asked Doug if he was a widower, because they had noticed that he was always in church by himself with the baby. He said that he guessed he was a widower of sorts – he was married to the deacon and would always be sitting alone in church!

On November 22, 1996, Marda was ordained to the priesthood and in December, John Lambert, rector at St. James in Kent, asked if she would come to St. James as priest associate. She began her 17-year tenure at St. James on Ash Wednesday 1997, becoming rector in 2004. At St. James, Marda led the congregation through facility improvements while focusing on mission and community outreach. During part of this time (2011-2014) she also served as Secretary of Convention and in other diocesan level positions. She completed the diocesan Leadership Skills Institute (LSI) and the College for Congregational Development (CCD), including workshops in group process, design skills, and organization, and served as a trainer and consultant. Known for her preaching, many of her sermons are currently available online.

Marda remained as rector at St. James until 2014 when she was appointed Canon to the Ordinary by Bishop Rickel. 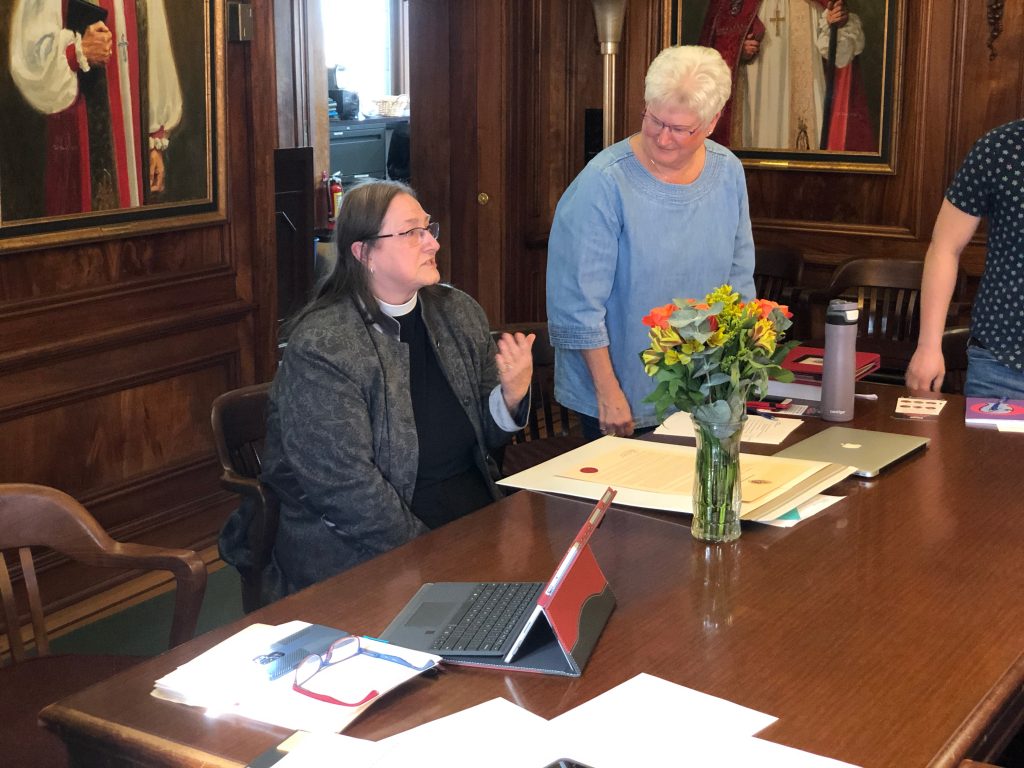 As Canon to the Ordinary, Marda has assisted the bishop in diocesan ministry, carrying out the diocese’s vision while supporting clergy and lay leaders in congregations. Mission oversight, clergy transition and deployment, work with congregations experiencing difficulties or conflict, and staff supervision are just a few of the responsibilities she has carried out so well over the last 6 years.

Now it may seem from this account that Marda’s life has been all work and no play – but that is far from the truth as she not only enjoys time with her family – but also music, art and many handcrafts – as can be seen on her Pinterest site- or in person if you’ve been the fortunate recipient of one of her handmade gifts!

Marda’s journey has taken her through many arenas of ministry. To quote from her time of Faithful Waiting:

I was still given to others, still used by God to do his work, and there is always much to do. I found many ways to be His hands and feet in the world; I found many ways to empower others to find their voice and to experience God. I found ways to be quiet and sit with God and to allow others to minister to me along the way. Community flows back and forth and in and among its members in the strength of the Creator who loves and redeems us.

With my deepest gratitude for Marda’s dedication and service, and on behalf of the members of this diocese which she has served so well, it is my distinct pleasure to appoint the Rev. Canon Dr. Marda Steedman Sanborn an Honorary Canon of Saint Mark’s Cathedral.