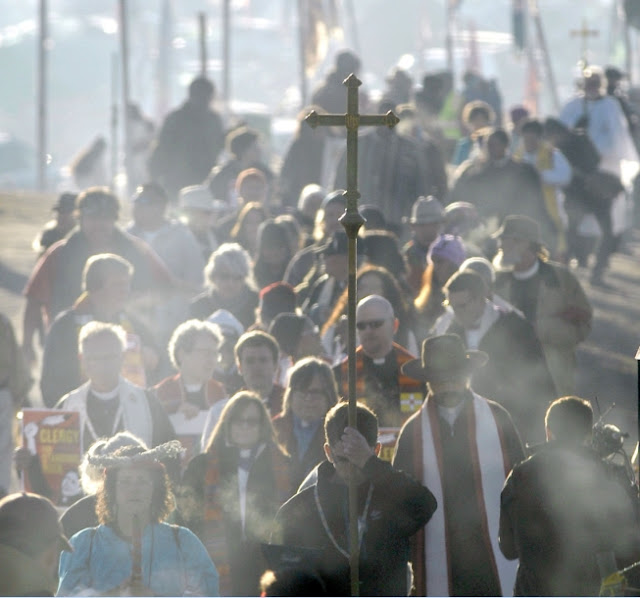 The Doctrine of Discovery has its roots in papal bulls of the 15th century, which gave Christian explorers the right to claim lands they “discovered” and to declare these to be subject territories for their Christian monarchs. Any land that was not inhabited by Christians was available to be “discovered”, claimed, and exploited. If the “pagan” inhabitants could be converted, they might be spared. If not, they could be enslaved or killed.

The Doctrine of Discovery as a concept of public international law was articulated by the United States Supreme Court in a series of decisions, beginning with Johnson v. M’Intosh in 1823. The doctrine was Chief Justice John Marshall’s explanation of the way in which colonial powers laid claim to new land during the Age of Discovery. Under the doctrine, title to newly claimed lands lay with the colonizing government whose subjects “discovered” the new territory. The doctrine has primarily been used to support decisions invalidating or ignoring indigenous possession of land in favor of colonial or post-colonial governments. John Marshall, who is most credited with describing the doctrine, did not voice wholehearted support of it, even while using it to justify judicial decisions. He treated the doctrine as established fact, viewing the land seizures which had been supported by the Doctrine of Discovery as actions which had already occurred and which must be recognized. Native cultures were labelled as inferior by the colonists, and this was the reason given for land seizures; however, Marshall was not concerned with whether this argument was justified. The Doctrine of Discovery influences United States Indian Law even today; it has been cited as recently as 2005 in the decision  City of Sherrill V. Oneida Indian Nation of N.Y.

Impact of the Doctrine of Discovery on Indigenous Peoples

The Rev. Brad Hauff, is the Episcopal Church’s missioner for Indigenous Ministries, and a member of the Oglala Sioux tribe.  He says, “What has always struck me is the similarities or the commonalities that Indigenous peoples and communities have among each other…regardless of where they are in the world, whatever continent they’re living on, the issues are very similar if not practically identical to one another.” After centuries of European colonization and subjugation around the world, the commonalities typically center around economic hardships and public health deficiencies. Indigenous communities face high mortality rates, low life expectancy, inadequate medical care, poor access to clean water, low food security, high unemployment, limited economic development, inadequate education, and high rates of substance abuse and suicide.