When you visit an Episcopal Church or any church at all for the first time it may feel a little strange and intimidating. We want you to be able to relax and feel welcome and able to participate as you choose. Here is a guide to some of what you might expect if you go to a worship service at an Episcopal Church. 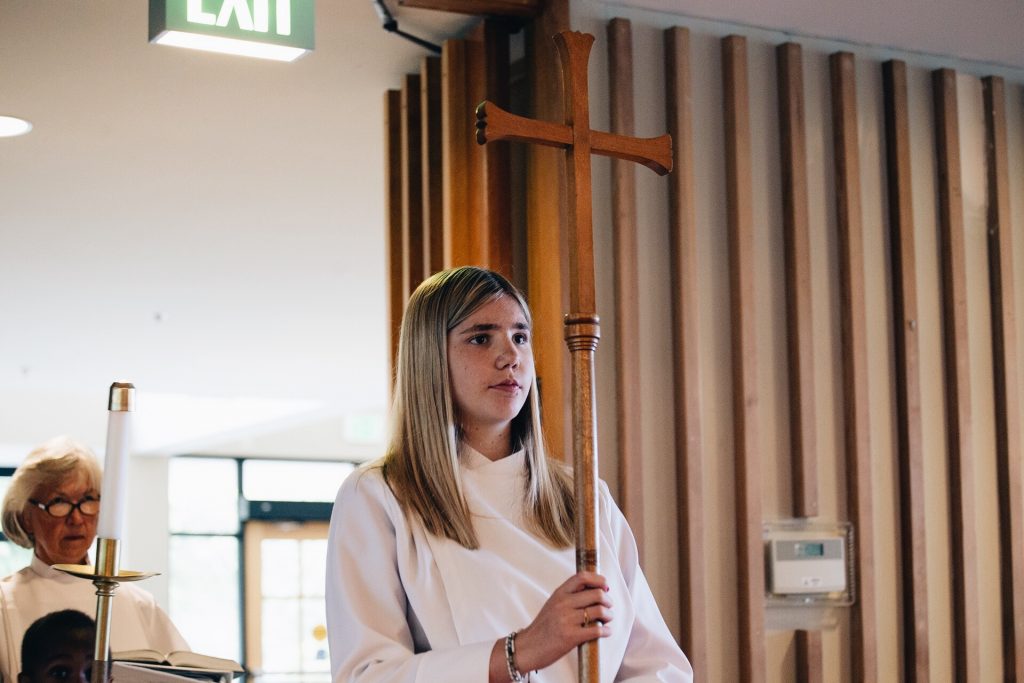 Getting there, getting settled, getting ready for church

It’s good to arrive a few minutes before the service so you can get yourself settled. There will probably be ushers or greeters who will give you a bulletin/service leaflet/ program which will guide you through the service. Most churches have pews (long benches) or rows of chairs. You can sit anywhere you would like. Sometimes new people will sit in the back just to check things out. Those of us who are short may like to sit nearer to the front so we can see!  In addition to the service leaflet there will often be various books in racks in front of you or in the pews. You will probably see red or black copies of the Book of Common Prayer, sometimes called the Prayerbook or the BCP. This book has various portions of the service in it. Your bulletin will give you page numbers to find those sections. You will also probably see a dark blue book called “The Hymnal 1982” which has lots of music in it. Many churches have other supplemental music books as well.

A few minutes before the service there will be some music called the Prelude. It is meant to help us gather ourselves and prepare for the service. Sometimes it is instrumental and other times it is sung by everybody.

Most services start with a song that everyone sings while standing. In many churches there will be a procession of liturgical ministers, people who have specific jobs to do during the service. Usually the procession is led by the cross and you may see people bowing to the cross as it passes by as a gesture of respect.

Once the song is over the presider (the priest leading the service) and the assembly (everyone else) say the Opening Acclamation which is a formal way of greeting one another. Then there may be a short piece of music praising God or asking for God’s mercy. (Music like this which is a piece of the service is sometimes found in the front of the Hymnal in a section where all the number are preceded by “S-“ which stands for “Service Music.” The the presider will say a prayer called a collect which is mean to collect us and our thoughts together as the concluding piece of our gathering.

The Liturgy of the Word 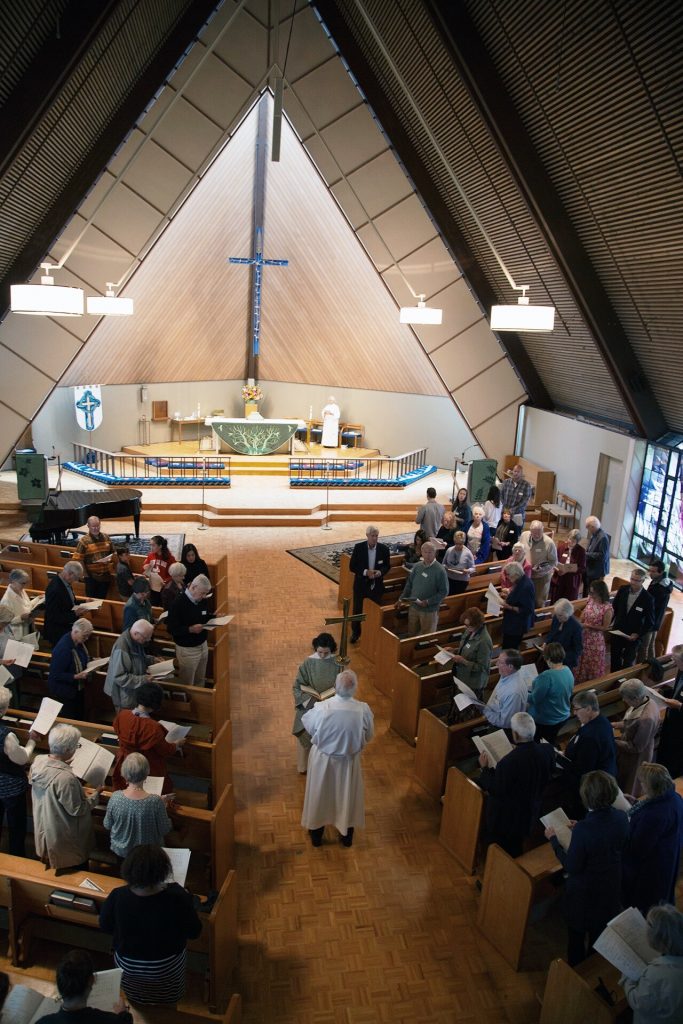 Readings, sermon, statements of faith, prayers of the community

We all sit down to hear readings. Most of the time there is a reading from the Hebrew Scriptures (Old Testament); a psalm; a reading from the Christian Scriptures (New Testament) and a reading from the Gospels. These readings are part of a set “lectionary” which assigns readings for every Sunday on a three year cycle. Members of the assembly usually read the first two readings. The psalm is normally said or sung by everyone. Your bulletin will either have the psalm printed in it or tell you where to find it in the Prayerbook or songbook.

Because the Gospel, the stories of Jesus’ life and death, are central to our faith, that reading gets “special treatment.” Normally an alleluia, or some song welcoming the Gospel is sung and the Gospel book is brought into the middle of the assembly and read by either a deacon or a priest. Everyone stands for this reading and turns and faces the Gospel Book.

Following the Gospel a sermon is preached, usually by a priest (but on occasion it might be a lay person). The sermon is meant to take what we have heard in the readings and engage those learnings with our current lives.

After the sermon, the next several pieces of the service provide a way for us to respond to what we have heard. Because we are actively responding we stand up at this point. We say the Nicene Creed, an ancient statement of faith used by most Christian churches which binds us together with Christians of all generations. We pray the Prayers of the People. These prayers are a series of petitions led by a member of the assembly with a response by the entire assembly at the end of each one. The petitions include prayers for the Church, the world, the nation, those who are sick and those who have died. The presider concludes these prayers with a collect, once again “collecting” our prayers.

After the prayers during most of the year we say the Confession (the confession is sometimes omitted during very celebratory seasons of the year). The confession is an opportunity to confess together the ways we have not loved God or others. Sometimes people kneel for the confession as a sign of their penitence.  At the conclusion of the confession, the presider says the absolution, words reminding us that God forgives our sins.

The presider then bids “The Peace.” This can be a particularly awkward moment for people who are newcomers or visitors. What we are doing is ritually enacting our need to be in right relationship with one another before we go to communion. We do that by saying “Peace be with you” to one another. People may shake hands or embrace each other. You can greet the people right around you. In some places the Peace is a little more exuberant and people will actually leave their seats to exchange the Peace with more people. We sometimes forget the ritual we are enacting and devolve into more casual greetings and other conversation because we are so glad to see each other!

In many churches the Peace is followed by announcements. This is not a formal part of the ritual but is a chance to let people know what is going on in the community and how to get involved.

The Liturgy of the Table

Collecting gifts, getting our meal ready and praying over it, sharing bread and wine

A collection of money is taken at this point. Often a piece of music is sung or played while the collection is being taken. Our offerings symbolize both our bringing of ourselves to worship and our support of the life of the community. It is fine for you to put whatever amount of money in or to put in nothing at all. (You may wonder why so many people don’t put anything in. There are many reasons, of course, but one big one is that many church members make their financial contributions in ways other than putting it in the plate, i.e. through credit card deductions, monthly checks, etc. ) The bread and wine we will use for communion and the money that has been collected are brought to the Altar Table and the liturgical ministers set the Table for Communion. 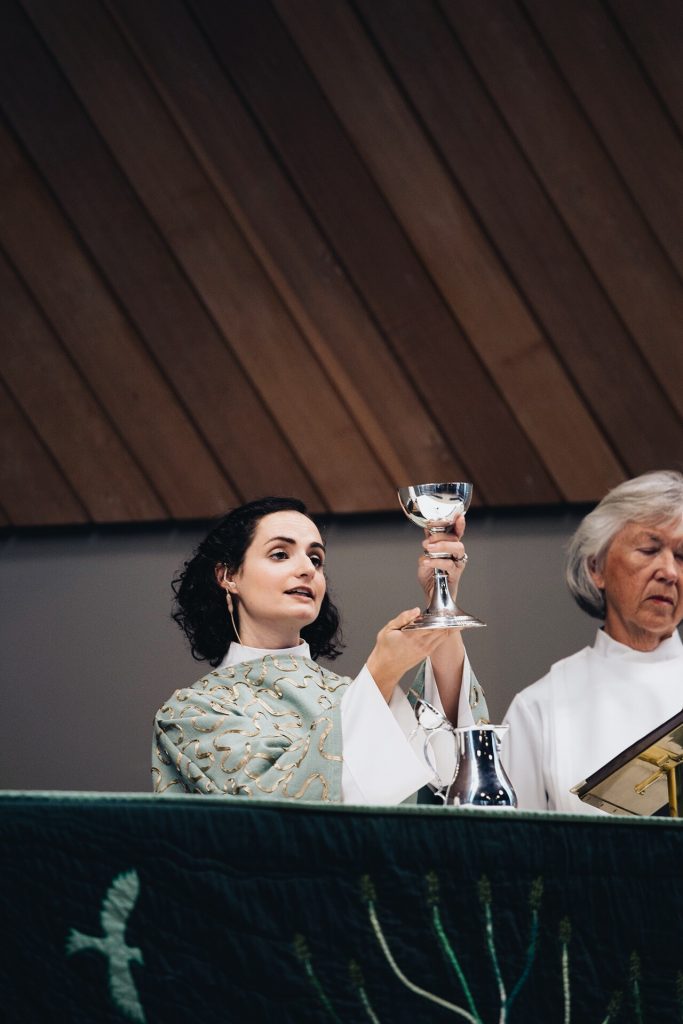 The presider prays an extended prayer. It starts with a dialogue between the presider and assembly called the Sursum Corda (literally “lift up your hearts”). The presider then praises God for God’s action in our lives. This initial section can in some cases be specific to the season we are in. This selection concludes with the Sanctus “Holy, holy, holy”, a response normally sung by the entire assembly. The prayer continues with a retelling of the story of the Last Supper and the presider asking the Holy Spirit to come into the bread and wine and into us.  At the end of the prayer we all say Amen, which our way of assenting to the prayer. We stand at the beginning of the Eucharistic Prayer. After the sanctus, you may kneel or continue standing. Different communities have different sensibilities around this; in some places most people stand, in others, most people kneel. Either one is totally fine.

At the end of the Eucharistic Prayer everyone prays the Lord’s Prayer. Then the presider breaks a piece of the bread, symbolizing Christ’s body being broken for us. After this symbolic breaking, some more practical preparations are made which might include pouring additional chalices of wine, breaking the bread into pieces for distribution, etc. Words, called the Fraction Anthem, are either spoken or sung at this point that reflect the actions taking place. Once the bread and wine are ready the presider invites people to the meal.

People generally come forward and stand or kneel at the altar to receive communion. Most places have ushers to help guide you; if there are no ushers, this is a good time to watch what others are doing and follow their example. The official policy of the Episcopal Church is that all baptized people may receive communion. Many churches have broadened that policy to invite anyone who is seeking God to receive.

If you don’t want to receive communion that is totally fine. You can remain in your seat, or you can also come forward and cross your arms over your chest. The priest will offer you a blessing instead of communion.

If you do want to receive, hold out your hands and the priest will put a piece of bread in your hand. Then another liturgical minister will come with the cup of wine (and it is wine!). There are few choices here. You can eat the bread when it is put in your hand and then take a sip of wine from the cup. It is okay and actually helpful for you to touch the cup and help guide it to your mouth. If you don’t want to drink from the cup you can also leave the bread in your hand and the person with the cup will dip the bread in the wine and then place it in your mouth. It is also totally fine to receive only the bread or only the wine; either is considered a full receiving of communion. There are many reasons people might want to receive only one so don’t feel self-conscious about that. Once you have received, simply return to your seat. Often music is sung during or near the end of communion.

Giving thanks, being sent forth

After everyone had received communion we all stand and say a prayer which your service leaflet will either have printed or tell you where to find it. The priest then asks God to bless us. Another song is usually sung by everyone at this point during which the liturgical ministers may process out. At the very end we are dismissed by a deacon or priest, sent out into the world.

Often there is an instrumental postlude played. It is fine to stand up and leave your seat at this point or you may want to remain and listen to the music. Once the service is concluded people can spend some time talking with each other. Often there is coffee to be enjoyed! People leaving customarily greet the priest at the door and you might want to introduce yourself as a newcomer.

Every church is a little different, but this reflects what happens in the majority of churches. We hope you will feel comfortable enough to try it out.

Find an Episcopal Church     Find a Church in Western Washington

What to Expect When You Visit an Episcopal Church