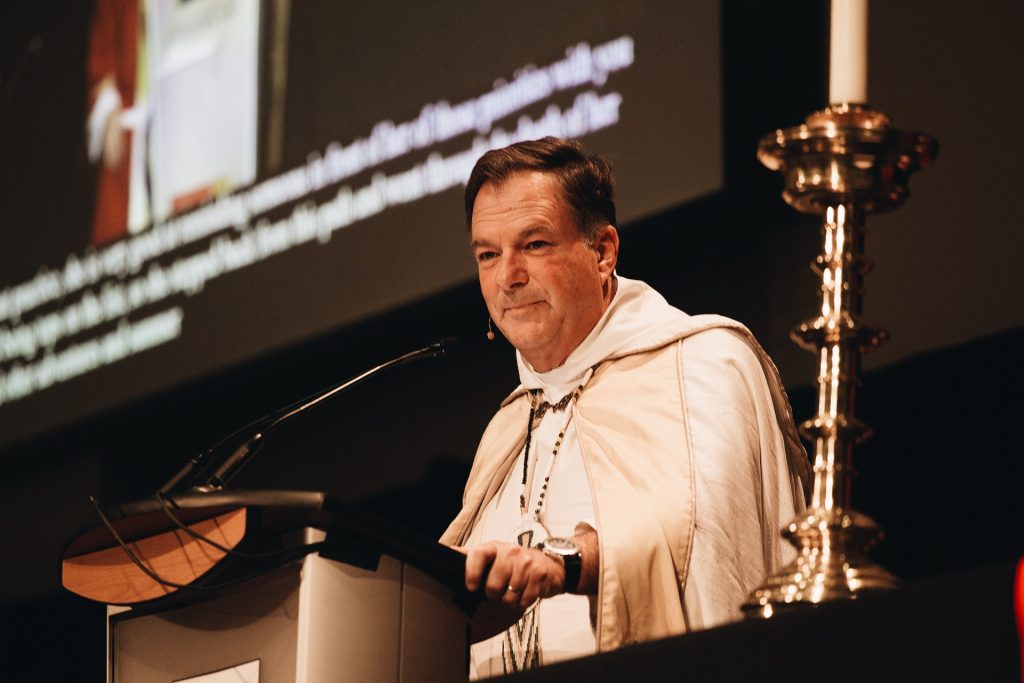 The reading today from the Acts of the Apostles begins with the 12 disciples saying, or at least having these words put into their mouths, “It’s not right that we should neglect the word of God in order to wait tables.” That seems kind of like a slight to me. As if that lowly work of waiting tables, we might say this is one of the first whisperings of delusions of grandeur about those in leadership in the church. We can all testify it was not, nor will it be the last. Waiting tables is put up as a lesser act, one of essentially neglecting the word of God, but it would not be long before the disciples themselves realize that this is exactly the work of the Gospel and a completely full, rich, and worthy response to the word of God.

You might think of it as the difference between the chef you never get to meet but you’re thankful for because she has provided you with a fabulous meal, and the waiter who you do definitely get to know and without whom you probably would not eat. Both seem equally important. Don’t get me wrong, I have no problem with division of labor that the disciples are getting at here and the need for all to have a part, a job, a task to do in order for the church to work. That all seems true to me. But the line about it being more important, hopefully was for them and is for us now, a learning moment.

Stephen, the first deacon, really was perhaps the first one to say, “Hi, my name is Stephen and I will be your waiter this evening.” Also, I’m thankful we have moved on from those being selected being all men. We know for certain that even though they are the ones that get the mention in this and so many places in Scripture, the women that don’t are just as much and in every way just as deeply committed in practicing this ministry. And without any of the accolades. They certainly aren’t named. I just wanted to get all that out of my system. 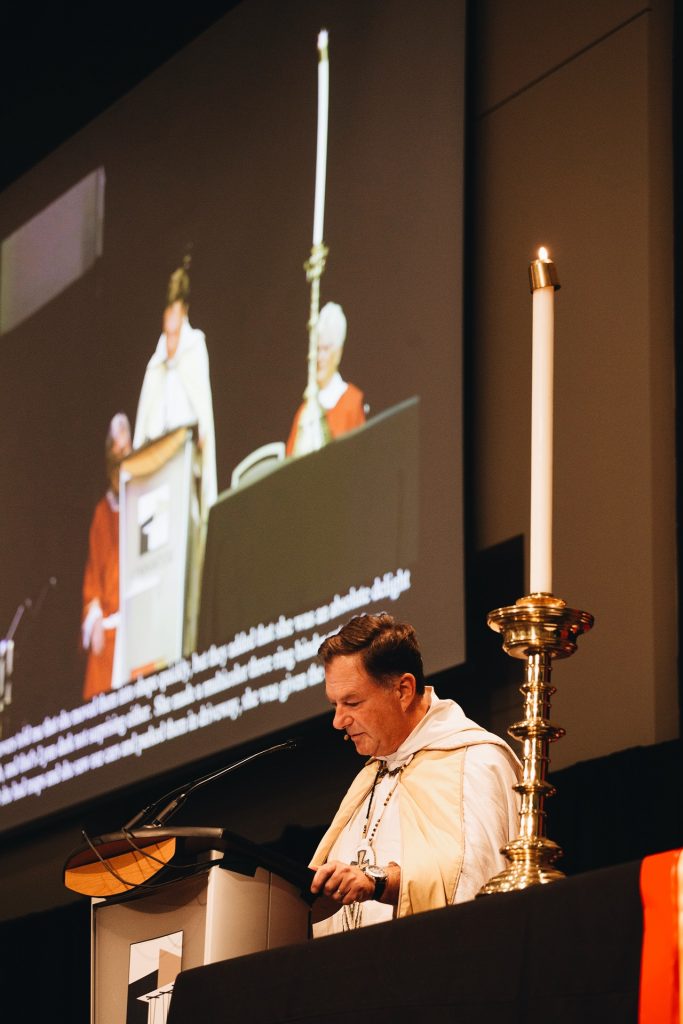 Which gets us to today. The incarnation of all of this we are blessed with this day, rests in our beloved Linda Potter. And so we see it now in living color, in and through her. I have to say this moment, this convention, this theme of pilgrimage and history and the precipice of where we have been and where we might be going from here, and then having Linda as the ordinand today is pretty moving for me. It is in a way, a full circle kind of thing. Linda and I met on this pilgrimage back during those Walkabouts over 12 years ago. She was on the transition committee and was actually my shepherd in the transition process. She was in fact the first person I talked to, how I learned I had been elected bishop here. It was her voice that first delivered that news.

Later she received all of our furniture in our house. Doing all of that through pictures we had sent her in hopes the movers might put the big stuff right where we wanted it. I didn’t know Linda quite good enough yet to realize just what I had inflicted on the movers that day. Those of you that know her would not be surprised if the movers told me she whipped them into shape very quickly. But they added this, that she was an absolute delight to work with. And that’s Linda. Not surprising either. Of course Linda made a multicolored three ring binder out of those pictures. She had maps and graphs and had measured doorways to make sure things were going to fit. She saw our cars come off the truck and parked them in our driveway. Basically, she was given the arduous task of keeper of the keys, keeper of all of our belongings until we could get here. And my family will be forever grateful to her for that and many other things.

Back then, this day was not even remotely in my mind. I had no idea of it even being a possibility. I really didn’t know that Linda had been in the ordination process already. She had retreated from it for some very good reasons and reasons with a lot of integrity. And she took her journey very seriously. What I have learned about her is she’s a person of great integrity, intention, and one who does tend to get her priorities in the right order. And from that practice she is very good at reminding someone in front of her that those priorities – with you being a child of God being tops on the list. So she stepped back from this path. She went through the death of her beloved husband and some other of life’s unexpected surprises and adventures and in all of that, as one of my favorite songs goes, “summers and winters scattered like splinters and four or five years slipped away.” A quiz later on where that came from. 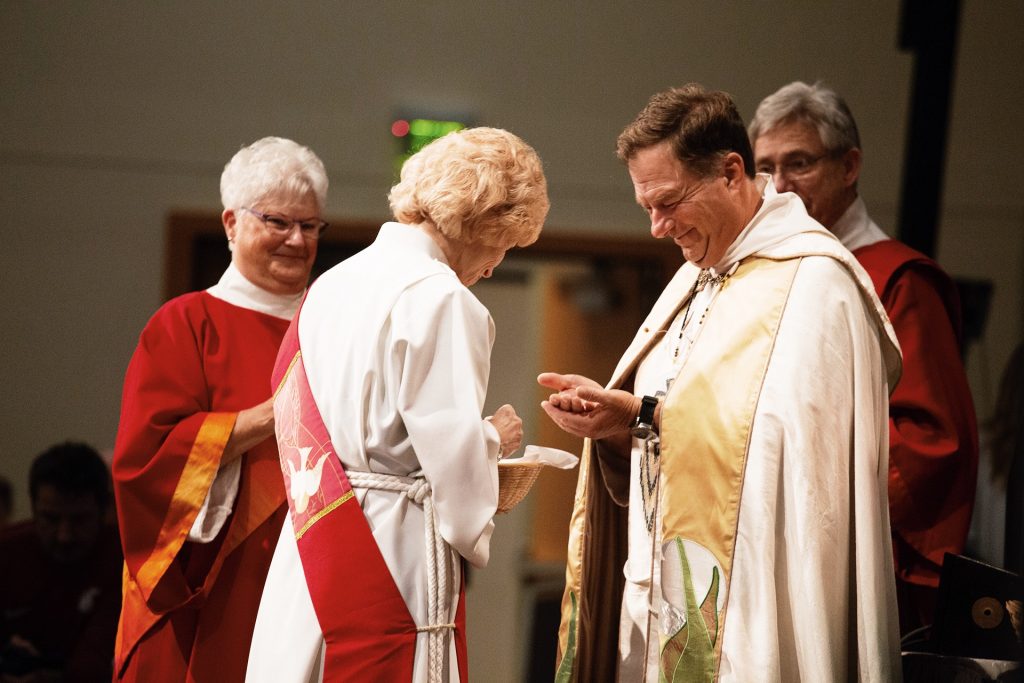 As she walked her path during those years, convinced the turn she had taken back then was probably the right one, a fellow companion along the journey – and not just one but many she would encounter on her walk – urged her to dig back into that earlier call. She finally did, coming to me a few years ago and asked me if she could resume her path. In that time she has engaged that process with the joy and eagerness that is the reality of her. And so here we are today.

I want to say that to me, Linda Potter is the fullest incarnation expression of what we should be looking for in people to put forth for ordination – either for the diaconate or the priesthood. To put it succinctly, someone who is already living into that vocation. Most of you know my favorite definition of a deacon is the persons we have appointed and anointed to go out into the world to find trouble and bring it back to the church. Linda has been doing that her whole life.

I’ll also share that I’m a little worried that anyone comes to me seeking ordination with words that say something like, “I would like to become a deacon.” I almost always ask one seeking this ordination, “What do you see as your diaconal ministry?” Sometimes I get blank stares at that question. Sometimes I get very honest replies that say, “Well I was hoping if I become a deacon that I would find one.” But of course I believe that’s getting it all backwards. Linda not only had no problem answering that question, but pretty much her life already exuded it. She is a deacon. Today the church will finally catch up to that. That’s how it should be.

As a complete aside, I wanted to tell you that when I’m typing a sermon or letter and using the word “diaconate,” often auto-correct comes into play. There are many days I hate auto-correct. I know some of you do, too. Anyway, instead of “diaconate” it fills in “diagonal.” And I’ve thought about it this time as I created this sermon. Diagonal ain’t so far off when it comes to you Linda. You have certainly taken the diagonal approach to this day. And the church has played it’s role in that too. Really, if you think about it, all pilgrimages, all journeys are like that. But as that old Spanish proverb says and I believe is so true, especially when we see and know life is pilgrimage, “God writes straight with crooked lines.” 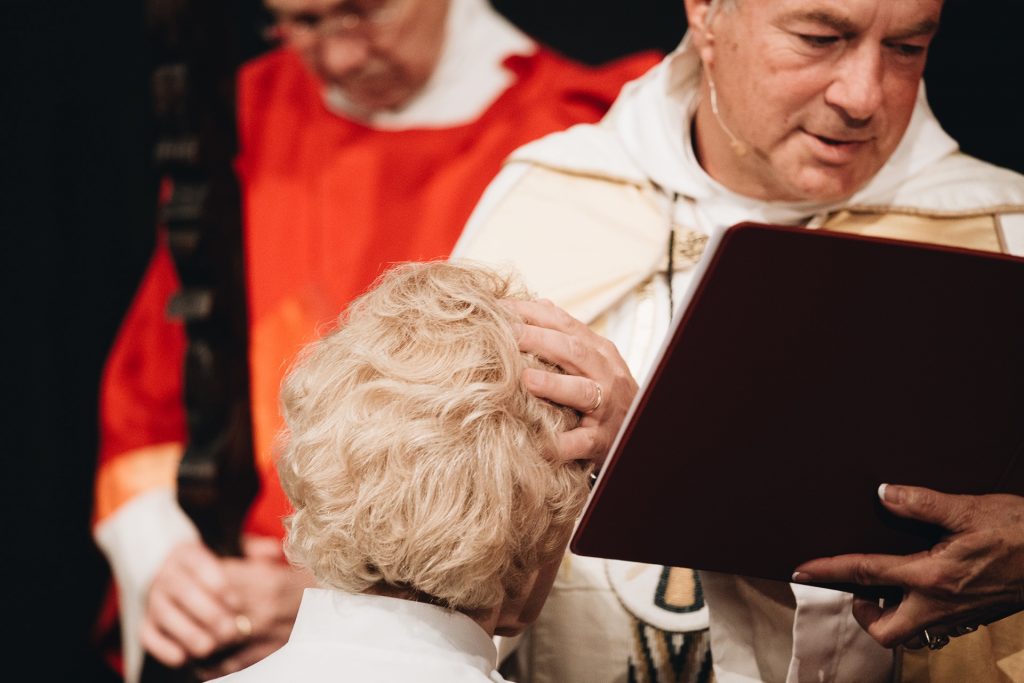 And all of our pilgrimages are really just that, getting straight to a spot, a place, an event, an ending, new beginnings, straight with crooked lines. With lots of turns and obstacles and challenges and adventures and surprises, each and every one of those asked for or not, liked or not, making us better in the moment we now inhabit. Linda in a moment I’ll be giving you a simple dish towel from my home kitchen. I’ve done this with every deacon I’ve ever ordained, because I believe it’s the perfect symbol for this important office and vocation you take on today. Or perhaps I should say that the church catches up to in you today. A towel from my kitchen is an every day, ordinary thing turned extraordinary in it’s service. As Benedictine as you can get.

It is a symbol of how you’re called to take ordinary things, ordinary events, ordinary meetings, ordinary moments, and recognize them as holy. A towel to drape over your arm and to say, “Hello. My name is Linda and I will be your waiter today.” You’ve been doing it for years, and now we’re asking you to do it on our behalf as our representative. I want to be clear about one thing, that it is not a lowly job or a lesser one. There is no neglecting the word of God in any of it. It truly is living the word of God, being an outward and visible sign to the word of God. You will spread the Gospel and be the Gospel doing it. And here is the greatest thing about this very moment. I know you already know it. My sister, thank you for walking this road and never letting go of this call, for being you and for serving us. My sisters and brothers I have said these words to you in the name of the Father, and of the Son, and the Holy Spirit. Amen.