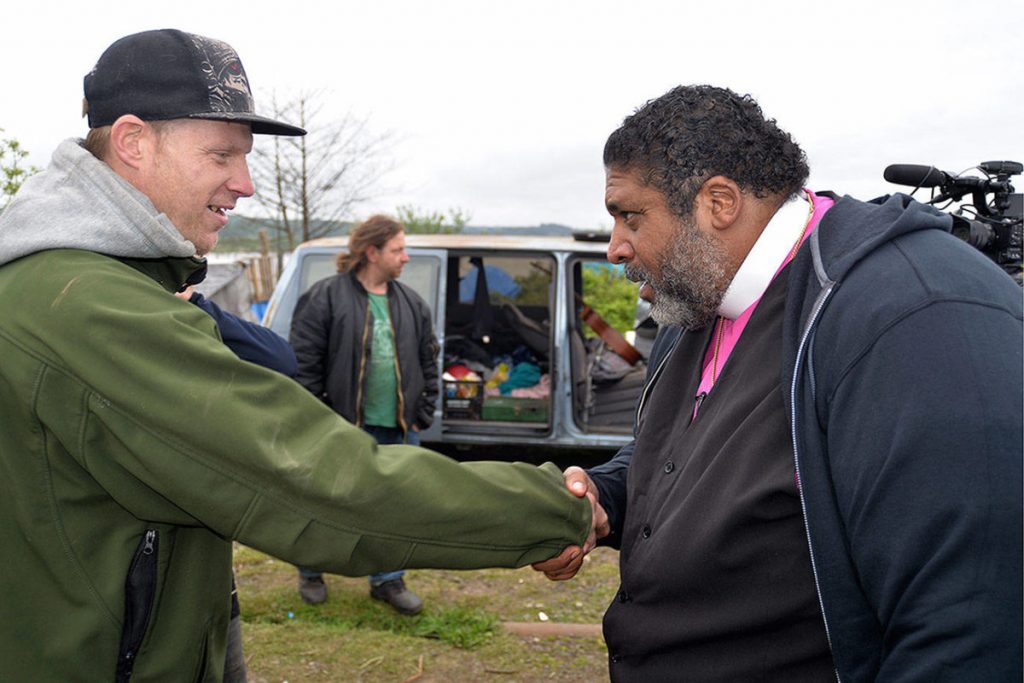 On March 20-21, the Rev. Dr. Liz Theoharis and Bishop William J. Barber – co-chairs of the Poor People’s Campaign: A National Call for Moral Revival – will return to the Diocese of Olympia. This visit is part of the campaign’s current 20+ state tour: “We Must Do M.O.R.E. National Tour: Mobilizing, Organizing, Registering, Educating people for a movement that votes!” Confronting the five interlocking evils of poverty, systemic racism, the war economy, ecological devastation, and our nation’s distorted moral narrative, the M.O.R.E. Tour is recruiting people across the US to converge on Washington, D.C. for a mass Poor People’s Assembly and Moral March for June 20, 2020.

On Friday March 20, Barber and Theoharis will join leaders in the Washington State Poor People’s Campaign for a march and mass meeting in Seattle. The march will gather at 5:30pm outside of the Seattle Public Library Central location (1000 4th Ave), marching through downtown and then gathering for the 6:30pm mass meeting at Plymouth Congregational Church (1217 6th Ave). Details on the event are available below. On Saturday March 21, Barber and Theoharis will then travel to Grays Harbor County for a more intimate site visit with Chaplains on the Harbor, poor and homeless residents of the county, and homeless plaintiffs in the recent federal lawsuits against the city of Aberdeen.

Bishop Barber’s last visit was made to Aberdeen on May 1, 2018, where he spoke with residents of the city’s largest homeless encampment (now demolished) and joined Chaplains on the Harbor to preach at their anti-poverty revival. The Rev. Dr. Theoharis has made multiple trips to Grays Harbor County over the past several years, supporting the work of Chaplains on the Harbor most recently as a political educator at their 2018 “Harbor Freedom School.” Chaplains on the Harbor members serve on both the state and national committees for the Poor People’s Campaign, have testified with the campaign before members of the US House and Senate, and taken part in direct actions at the Washington State Capitol and US Capitol. Join us in Seattle on March 20 for a powerful event!

WE MUST DO M.O.R.E. NATIONAL TOUR

Sunday of the Passion – Palm Sunday