Dear friends and loved ones,

As some of you know, I will be leaving my job at Chaplains on the Harbor at the end of March. I am so proud of this organization and all the work we’ve done together over the past eight years, and deeply grateful to know that many capable hands are picking up the work I’m handing off. I plan to stay in close contact with our leadership and the whole team at Chaplains as I move into my new work, which is what I’m writing to you about. 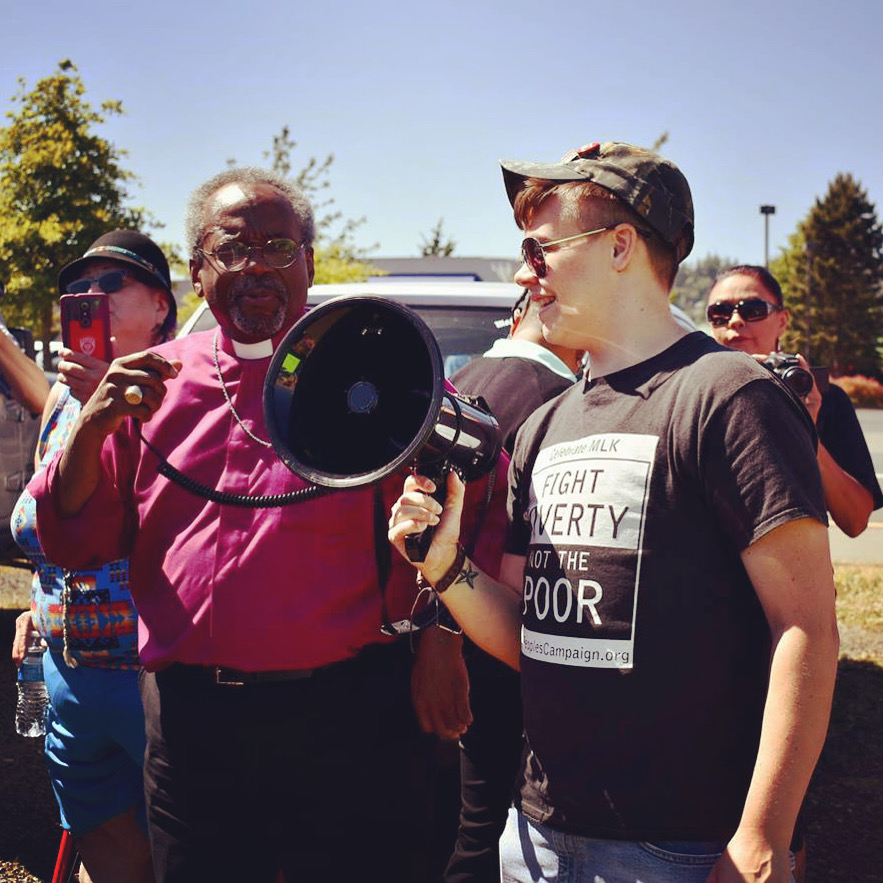 In April, I will begin working with the Kairos Center for Religions, Rights, and Social Justice at Union Theological Seminary—one of the anchor organizations for the Poor People’s Campaign: A National Call for Moral Revival. I will be responsible for building out the Kairos Center’s strategy on countering the explosive rise of White Christian Nationalism across the U.S.

As a graduate of Union and long-time collaborator with the Kairos Center, this move feels both like a homecoming as well as an invaluable way to build upon the key lessons we’ve learned at Chaplains on the Harbor—from counter-recruitment in white supremacist networks, to building projects of survival in predominantly poor white rural communities, to leveraging the power and support of the institutional church to defend human rights for poor, homeless, and incarcerated people. I am beyond eager to share these lessons across the country with other faith and grassroots groups engaged in similar struggles, and look forward to widely expanding the work we’ve begun at Chaplains.

Because this is a new position and a new front of work for the Kairos Center, I am responsible for fundraising my own salary and benefits for the first year. I am asking you, your congregations, and/or your organizations to prayerfully consider making a financial contribution to this effort. Any amount you are able to give is deeply appreciated by me and my family, as well as by the communities across this nation with whom we will be working. I would be grateful for leads you may have on grants or other relevant funding, and more than glad to teach, preach, and present on our work for interested groups and supporters.

To contribute to this effort, you can donate online through the Kairos Center, with “Aaron Scott” in the last field on this form, labeled “In Celebration, Honor, Memory Of.” Your donation is tax deductible. If writing a paper check, please make it out to:

Thank you so much for your encouragement, your support, and most of all for your prayers on this journey toward a fair and loving transformation of our country. If you’d like to know a little more about me, or the context of this work, read on for more– and please feel free to write, text, or call me with any thoughts, ideas, or questions.

Blessings and much gratitude!

Context for this Work:
As the pandemic and economic crises give way to growing inequality, racist violence, and widening poverty, an epoch-defining fight over the moral values and priorities of our nation is underway. Within this fight, the forces of White Christian Nationalism (WCN) wield tremendous political power and find common cause through a complex web of beliefs and values, religious interpretations and social theories, and historical revisionism. The result is an ideological battering ram used to justify and advance violence on a startling scale, whether that be the epidemic of mass shootings or the violence inherent in policy decisions that limit health care and keep wages low.

The future of our country rests, in part, on addressing WCN and the rise of violent authoritarianism in American politics. The last five years, culminating in the events of January 6, should not be seen as a new development or an aberration from the norm, but as an intensification of a long-term dynamic of American life. The Trump years only affirmed the rising threat of a highly motivated White Christian Nationalist movement with political power.

Today, the social forces committed to this nationalism are growing bolder and are even able to win certain aspects of mainstream exposure and support, even as their agenda is unpopular in the country as a whole (in fact, recent polling suggests that a majority of people across the partisan spectrum support progressive policies like universal health care, raising the minimum wage, and more). The America we collectively envision—a multiracial democracy where everyone can thrive—is diametrically opposed to WCN, and realizing that vision necessitates overcoming WCN. This is an ambitious, centuries-old struggle. But we believe that we can make a contribution to it.

My Role:
Aaron Scott’s role at the Kairos Center will be to spearhead education, training, strategic interventions and counter-recruitment efforts in regard to the rapid growth of White Christian Nationalism across the United States—particularly through engaging religious networks and institutions, rural and poor white communities, and places where White Christian Nationalism is on the rise. Aaron has worked in grassroots poor people’s organizing for fifteen years. Trained by the Poverty Initiative (now Kairos Center) and their Poverty Scholars Program, he graduated from Union Theological Seminary with an M.A. in Biblical Studies in 2009. Aaron co-founded Chaplains on the Harbor in 2014, an outpost of the “freedom church of the poor” in rural Grays Harbor County, Washington State. He is the Missioner for Anti-Poverty Organizing in the Episcopal Diocese of Olympia, a previous winner of the Bishop’s Preaching Award, and founding member of the Kairos Center’s Freedom Church of the Poor.