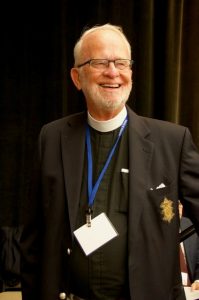 The TV Eucharist program was first broadcast on Easter Day, April 22, 1973 on KING-TV5, NBC’s Seattle affiliate. the creation of the late John C. Leffler, former dean of St. Mark’s Episcopal Cathedral. At first, only the clergy and congregations of Episcopal churches in Seattle took part in this production. However, over the forty-four years of its running, TV Eucharist grew to involve over 68 congregations throughout western Washington. The mission of TV Eucharist was to provide a service for those who are shut-in or otherwise unable to attend church.

The program itself is a copyrighted production of King Broadcasting Company in cooperation with the the Diocese of Olympia (the Episcopal Church in Western Washington) and the Northwest Washington Synod of the Evangelical Lutheran Church in America.

TV Eucharist aired as a 30-minute program every Sunday at 5:00 A.M. on KING’s cable outlet, KONG-TV channel 16 cable channel 6. It was available in most of western Washington, in the British Columbia lower mainland and Victoria, and in parts of central Washington. Based on viewer response, many of the viewers were non-Episcopalians, a number being Roman Catholic. Yet, with many viewers not appearing to be associated with any particular church. According to its final industry ratings, the weekly viewership ran around 5,000 households watching TV Eucharist​ every Sunday morning. Over 100,000 copies were mailed out to viewers over the show’s tenure.

​After 44 years of serving the viewing public, TV Eucharist aired its final broadcast on Sunday, July 16th, 2017. The success of the show as an outreach ministry would not have been possible without the initiative, leadership and commitment of the show’s producer – The Rev. Mike Jackson.

Mike’s tireless efforts not only connected thousands of people in worship through the medium of television but also connected Lutheran and Episcopal clergy throughout the state, as ministers served side-by-side behind the studio altar. Mike’s methodical preparations, advice and welcoming style put service participants at their ease before the cameras came on. Those leading a given service felt that they were reaching through the camera lens to pray with whomever was on the other side of the television set. Mike’s openness to creative expression and his ease made taping sessions a true treat for all who participated. The value of what he created in developing the TV Eucharist program can never be underestimated, and the impact of its services and sermons will continue to ripple throughout the lives of its viewers and those fortunate enough to have been participants on the set.

Zoom Campfire on the Eve of Pentecost