The Patient Ferment of the Early Church: The Improbable Rise of Christianity in the Roman Empire

I was honored to be asked by the Faith Formation Team to offer my thoughts on books and articles to read. I am reading several books right now, which I tend to do. The one I would recommend is entitled, The Patient Ferment of the Early Church: The Improbable Rise of Christianity in the Roman Empire by Alan Kreider. 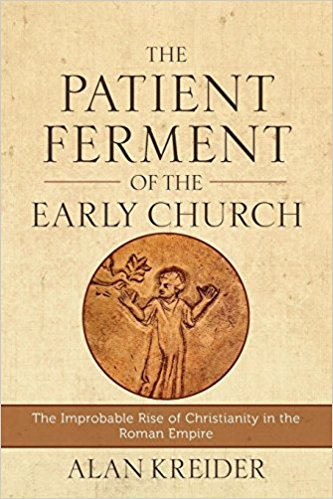 I heard this book spoken of in a sermon, and before I could even leave the nave I had purchased it. Kreider is a Mennonite, and that, in and of itself, is interesting in someone from his tradition reviewing the early church teachers. I am intrigued by this book because I feel its relevance for our time is so crucial and needed.

Kreider writes of the year 250, and of Cyprian, Bishop of Carthage in North Africa. It was a time of upheaval, conflict, and epidemics. Kreider writes:

Amid it all, Cyprian, as bishop, wanted to keep the Christians true to their tradition. This, at its heart, meant embodying the Christian good news, bearing it in their bodies and actions, living the message visibly and faithfully so that outsiders would see what the Christians were about and, ideally would be attracted to join them. So, in 256, Cyprian wrote a treatise of encouragement to his people. ‘Beloved brethren, we are philosophers not in words but in deeds, we exhibit our wisdom not by our dress, but by truth; we know virtues by their practice rather than through boasting of them; we do not speak great things but we live them.’

Right now, I believe we need a resurrection of Christianity within the Empire that we live in. I have been reading this book through that lens. Kreider takes a special focus on “holy patience” which was a major theme amongst the early church teachers. The crux of the book leads up to a chapter entitled “The Impatience of Constantine.”

Of course, Constantine’s recognition of this new faith called Christianity is seen as the best time, and also the worst time for the faith. By bringing it into the mainstream, it is argued, it also domesticated it, tamed it, co-opted it. One has to wonder, as so many across the ages have, if it did not in fact, end it. I have been more and more interested in the “practices” of Christianity for our age and this book is helping me challenge myself while learning more about from where we have come. How do we relearn the faith from which we were born where “we do not speak great things, but we live them?”