Several churches across the Episcopal Diocese of Olympia were vandalized on Martin Luther King, Jr. Day with messages of intolerance and political divisiveness. St. Luke’s Episcopal Church in Seattle, Trinity Episcopal Church in Everett, and Saint Mark’s Episcopal Cathedral in Seattle were all targets of these acts of hate. The leaders of all three communities have responded with such grace and love in the midst of such ignorant and destructive acts of intimidation, that we have decided to share their statements below with the wider community.

On the weekend we honor Martin Luther King Jr. and the gospel vision of God’s love for all people, St. Luke’s, Ballard was tagged with hate-filled graffiti. Because of the strong and broad community of support from both housed and unhoused neighbors, we were informed just hours after it occurred and our team of St. Luke’s Shepherds were able to block this message from sight before anyone arrived. 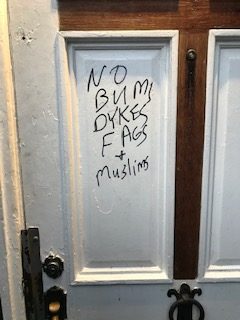 We stand with those who are persecuted, as part of the Body of Christ and in the communion of saints. This means a radical welcome for all people at the table, both at the Eucharist and at our daily breakfast. We are guided by our vision; We seek to form Beloved Community, which is welcoming and diverse, with Christian worship and service at the heart, and by core values of Beloved Community + Loving Service + Sacred Space + Spirit Filled + Sustainability.

It is deeply disturbing to be vandalized, targeted on neighborhood blogs and to receive letters, emails, and phone calls threatening the church for its mission of caring for those on the margins. It is infinitely worse to know that this hatred is the daily experience for many in our community.

I wear a bracelet, purchased from the Episcopal Bookstore before it closed, with St. Patrick’s breastplate engraved on it. It is a continuous prayer for those we serve and care for and for the larger community, including our sister congregations in the diocese.

From the Rev. Rachel Taber-Hamilton, Trinity Episcopal Church in Everett:

Civil Rights leader Martin Luther King Jr. preached that love on the level of society looks like justice. Over the course of this past weekend and MLK celebrations across the nation on Monday, various hate groups used the holiday to express their beliefs through acts of intimidation, desecration, and violence. Over Monday night, St. Mark’s Episcopal Cathedral in Seattle was vandalized with hate graffiti. 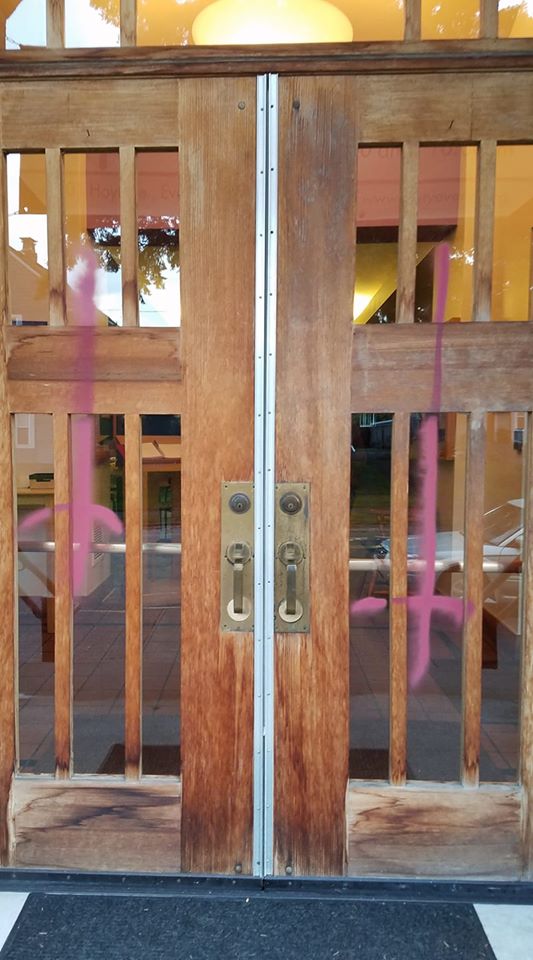 Trinity Episcopal Church was also vandalized that night with graffiti on our main entry doors that includes an inverted cross. Though this symbol in early Christianity was known as St. Peter’s cross and venerated, in modern times it has become associated as an anti-christian sign. If the first image is of a sword pointing upward beside the second image of an inverted cross, then the symbolism together is meant to be interpreted as “a war has been declared against Christianity” – a message intended to provoke an anxious reaction by someone seeking to sew or deepen social divisions. A police report has been filed noting this vandalism as a hate crime. Kelly DiCicco and Ralph Gilcreest have been working to remove the paint, and the wood of the doors and entry need to be sanded and re-stained. If you are able to help with this work, please contact the church office.

In the meantime, my sentiments echo those of the dean of our cathedral writing in response to the vandalism, “I find myself prayerful—for those whose lives are filled with such hatred that they can justify desecrating a church, for this community that we might bring the fullness of our hearts and souls into this call to be the Body of Christ (even when some in the world choose to hate us), and for this nation whose political discourse seems to condone acts such as this vandalism as justifiable in the course of partisan disagreements… I am hopeful, that their crime will only strengthen our resolve to be the Body of Christ in a broken, hurting world.”

I write today to share the sad news that the cathedral façade was vandalized during the night. 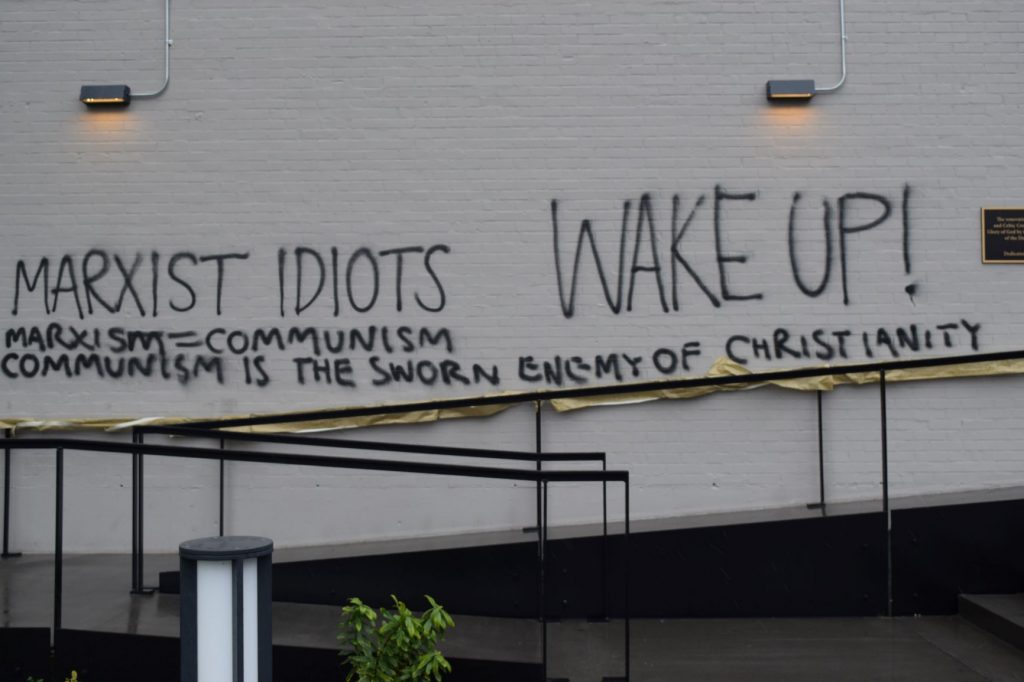 The photo… shows the message, which is clearly intended to incite us to some similar reaction of negativity and anger, but those are not the emotions I feel on seeing their message. I am saddened by their destructive impulse, which will cause us to clean the surface and repaint it at considerable expense. I find myself grateful that their message did not target a group of individuals based on race, orientation, or identity, using derogatory terms for injurious purposes. In the hours since seeing this early this morning, I find myself prayerful—for those whose lives are filled with such hatred that they can justify desecrating a church, for this community that we might bring the fullness of our hearts and souls into this call to be the Body of Christ (even when some in the world choose to hate us), and for this nation whose political discourse seems to condone acts such as this vandalism as justifiable in the course of partisan disagreements. And if I am honest, I am a bit amused by the graffiti—as if the perpetrators think they will have accomplished something by doing this. We are a community that holds a broad swath of political opinions, and we are the richer for that diversity. And I am hopeful, that their crime will only strengthen our resolve to be the Body of Christ in a broken, hurting world.

The irony is not lost on me that they did this on the heels of this nation’s annual observance of the legacy of Dr. Martin Luther King, Jr. and his cause of non-violence and justice for all. We can debate how best to engage that work, but we cannot conclude that the work of civil rights is complete. As the prophet Amos said, and Dr. King wrote from his cell in the Birmingham jail: “Let justice roll down like waters, and righteousness like a mighty stream.” We have work to do, my friends, in the cause of justice. Let us do so in God’s name, with courage and faithfulness, and let us remember that that arc of the moral universe is long, but it bends toward justice.

Vandalism Across the Diocese on Martin Luther King, Jr. Day

12 thoughts on “Vandalism Across the Diocese on Martin Luther King, Jr. Day”