The sun was shining on this brisk morning in Vancouver, WA as staff from the Office of the Bishop made final preparations at the Hilton Vancouver’s Heritage Ballroom. Tables were set and registration packets prepared for the clergy and lay delegates to the 107th Convention of the Diocese of Olympia. A few doors down, in the Discovery Ballroom, exhibitors from the diverse ministries and programs across the diocese were assembling their displays and preparing to inform visitors about their work within the community. The Convention Pages received their final instructions about helping throughout the next two days.

The morning calm was quickly broken by a flurry of activity as the convention attendees arrived and made their way to the registration tables before heading off to the exhibition floor. The Saint Mark’s Cathedral Shop and the Episcopal Bookstore had books, decorations, and gifts for sale in their makeshift shops at one end of the exhibition ballroom. Ministries like Mission to Seafarers, Seattle and the Refugee Resettlement Office had tables to let people know more about their ministries, while the programs within the diocese’s Faith Formation ministry took up an entire wall to highlight their programs and the support they provide to churches across the diocese. The Mental Health Taskforce, Bishop’s Committee for the Environment, and the Bishop’s Committee for Justice and Peace in the Holy Land all had displays that invited attendees to participate in the groups’ social justice efforts. Representatives from St. Andrew’s House and Camp Huston were there with updates from the diocesan campgrounds, retreats, and conference centers.

Representatives from diocesan ministries took over the second floor of the Hilton Vancouver as workshops began for anyone wishing to attend. Ken Hawkins, executive director of Mission to Seafarers, Seattle, spoke on using storytelling to raise more funds for your ministry, gain more volunteers, and impact more individuals with your work. Ron Miller and David Virtue presented a workshop on creating a safer church environment and mitigating the risks to people and church property. Greg Hope, the executive director of the Refugee Resettlement Office (RRO) provided an update on the work of this ministry in challenging times. There were workshops on developing a planned giving program, hosting a Life Planning Workshop, addressing depression in a church context, life in small groups, addressing environmental challenges, introductions to Fierce Conversations, and the use of coaching techniques in a ministry setting. 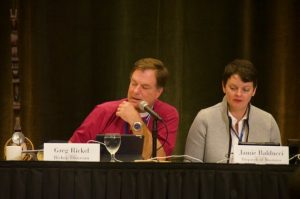 After Bishop Rickel called the 107th Convention of the Diocese of Olympia to order, opening worship began, led by Gretchen Van Blair of St. Andrew, Port Angeles and Ken Hawkins of Mission to Seafarers, Seattle. The bishop led attendees in a renewal of their Baptismal Covenant, assisted by the youth from across the diocese who served as the Convention Pages. Over the rest of Convention weekend, Susan Bloomfield and the Rev. Eric Steele, both of the Diocesan Liturgy and Arts Commission, put together moving liturgies that were led by members of Chaplains on the Harbor, Westport; St. Luke, Seattle; Faith, Poulsbo; St. James, Sedro Woolley; and Epiphany, Seattle.

After a few announcements and reports from the Secretary of Convention, as well as an ice-breaker table-activity to see who was born furthest away, Bishop Rickel gave his 2017 Convention Address (READ THE FULL TRANSCRIPT). In his address, the bishop looked back on the diocese’s last ten years together and the incredible growth that has occurred. There were reflections about the College for Congregational Development, the new Intercultural Development Inventory that has been implemented, and much time pondering the new diocesan vision. Bishop Rickel closed by saying, “Wherever bread is broken, God is there. The church is there. It’s good to be part of all of that, with all of you. I’m thankful for you beyond words, and I consider myself one of the most blessed people on Earth to have been called by you and be able to minister together with you in this place.”

After he concluded his address, Bishop Rickel invited those attending to reflect on the question, “As we turn ten together, what is the one most important thing we can do as a diocese?” Some of the answers included holding quarterly dinners by region, making sure to meet congregational needs, creating a relevant path for younger parishioners to carry the message, and claiming the mediating voice of the Kingdom of God. 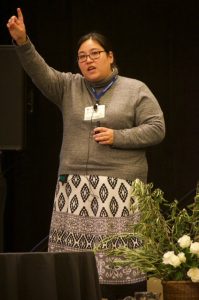 After a short break, where attendees could walk the exhibit floor (and stretch their legs!), the Rev. Canon Alissa Newton and the Rev. Arienne Davison gave a plenary presentation on increasing cultural competency (VIEW THE POWERPOINT PRESENTATION). From the Rev. Newton and the Rev. Davison during the plenary session:

Congregational Culture is deep, broad, and stable. It is also often invisible – especially to those who inhabit it. We will learn about cultural competency skills, and how to better assess and understand the culture of your congregation, and how to minister more effectively to people who are different than you.

The plenary session ended with time for representatives from the congregations within the diocese to discuss what they had learned and talk about possible ways for them to increase their cultural competency. 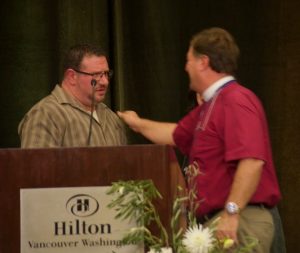 In 2011, Bishop Rickel established an award to honor Ky Chen’s 25 years of service, graciously and ably running the print shop at D-House. No matter how large or how last minute the request, Ky would get it done with a simple “no problem,” even if it meant rearranging prior plans or scrambling to get the needed supplies. He was a devoted employee whose enthusiasm and team spirit epitomized the best of any employee. The Ky Chen Employee Excellence “No Problem” Award recognizes outstanding lay employees from any congregation or affiliated organizations in the diocese. The previous 11 recipients of the Ky Chen Award have come from all over the diocese and embody the spirit of “no problem.” This year, Bishop Rickel presented the award to Kelly DiCicco of Trinity, Everett and Marcia Crewsden of St. John, Kirkland (READ MORE ABOUT THE KY CHEN AWARD RECIPIENTS). 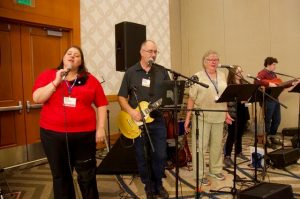 The first day of Convention ended with worship and the bishop declared Convention to be in recess until 8:30 the following morning. After the following morning’s liturgy, Bishop Rickel called the Convention to order and a few reminders and announcements were given to keep things running smoothly. Barb Fox, the Diocesan Treasurer, gave her report on the diocesan finances and recommended that the operating budget be ratified.

The Rev. Rilla Barrett of St. Stephen, Oak Harbor and member of the Resolutions Committee, presented a series of resolutions that were quickly ratified – including a cost of living adjustment for clergy and an amendment to the policy on health coverage for employees in diocesan congregations and the Office of the Bishop. There was a robust debate over the best way to meet the needs of deaf and hard of hearing persons at Convention – the vote was so close on several amendments that the Convention Pages were called upon to perform a hand count. Eventually, both resolutions passed.

The Rev. Alissa Newton presented the Bishop’s Preaching Award to Kate Davis, a lay person at St. Luke, Seattle – the first lay preacher to receive the award. Out of 39 submissions, the three finalists were all lay people. (READ AND LISTEN TO THE WINNING SERMON). 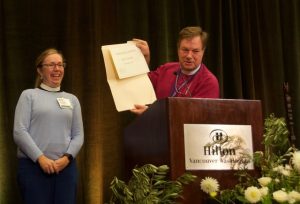 Following a 45-minute break, the 2017 Convention Eucharist began. Clergy from across the diocese donned their vestments and gathered in the lobby as they waited to begin. During the 2017 Convention Eucharist, Pat Grodt and Bill Thaete were ordained to the Sacred Order of Deacons and the Rev. Canon Marda Steedman Sanborn preached on what it means for us to be the body and blood of Christ (READ FULL SERMON TRANSCRIPT). This year’s offertory benefited Episcopal Relief & Development’s hurricane relief efforts. 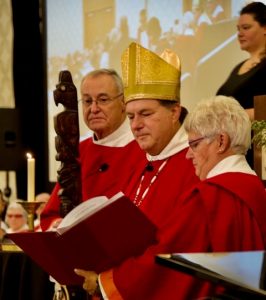 Following the Convention Eucharist and a break for lunch, Bishop Rickel presented the Bishop’s Cross Awards. In 1953, at the Diocese of Olympia’s 43rd Convention, the Rt. Rev. Stephen Bayne awarded the inaugural Bishop’s Crosses to 11 men and women. He asked them to accept the cross “as a witness to the high esteem in which we hold them, yet not them as much as what they have stood for and represented.” Since those first crosses were awards, 398 crosses have been given out. This year, Bishop Rickel presented crosses to Bob and Linda Knutson of St. Elizabeth, Burien and John Long of St. Timothy, Chehalis (READ ABOUT THE BISHOP’S CROSS RECIPIENTS HERE). Additionally, the Rev. Michael Jackson was named an Honorary Canon of the Cathedral for his work on TV Eucharist (READ ABOUT REV. CANON JACKSON AND TV EUCHARIST).

No Convention would be complete without the laughter (and groans) from Douglas Oles’ annual report of the Constitution and Canons Committee. As always, Doug was able to take one of the driest parts of any diocesan convention and make it the most eagerly anticipated part of the Diocese of Olympia’s gathering.

The business of the 107th Convention of the Diocese of Olympia concluded with Bishop Rickel asking our more than 100 worshiping communities to reflect on the new diocesan vision and ask: What is alive at your place that reflections this vision? What do the vision and stories inspire you to explore?

As the closing liturgy began and attendees started to make their way back to their homes across Western Washington, the question lingers. How will we live out this new vision for the Diocese of Olympia?

Wherever Bread is Broken: The 107th Convention of the Diocese of Olympia

Zoom Campfire on the Eve of Pentecost